The first supplement to the Mistborn Adventure Game pen-and-paper RPG has been released. Called Terris: Wrought of Copper, Crafty Games describes it as providing a detailed look at the history of the Terris Dominance and its people. Inside you’ll find a guide to the city of Tathingdwen, the heart of Terris society, as well as an exploration of both the secretive Terris Synod and the nascent Terris Resistance, plus all-new insights into the awesome power of Feruchemy.

For players of the Mistborn Adventure Game, there’s a bevy of new rules 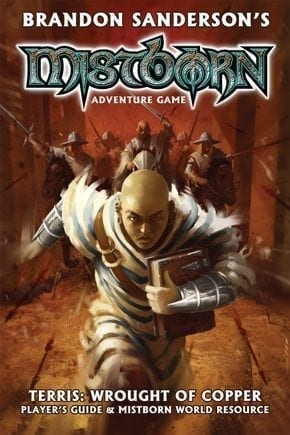 for creating and playing your own Terris Hero, including new Stunts, equipment, metalminds, and a new ability: Networks!

Also included is an epic adventure, “Justice, like Ash,” which sweeps your Crew into events that shake the Final Empire to its very foundations! A powerful Obligator has been murdered, a Terrisman stands accused as the killer, and it’s up to you to uncover the truth. Your hunt will take you from the paved streets of Luthadel to the ancient cobblestones of Tathingdwen and the farthest reaches of the Terris Dominance. Can you catch the culprit before the Lord Ruler’s wrath is unleashed across Terris? The fate of an entire people rests on your shoulders…

Tor.com is also doing a giveaway (US/Canada only) of two copies of the Terris supplement and one prize pack that includes the Terris supplement, the full Mistborn Adventure Game, and audiobooks of The Way of Kings and Words of Radiance. The contest ends today at noon Eastern time, so enter ASAP.