I’m very happy to report that the Mistborn trilogy ebooks are now, at long last, available again in the UK (and Australia and New Zealand) in what should be error-free editions (unlike the old versions that used to be available). This has been longer in coming than any of us would have liked, but it’s good to finally be able to announce this. 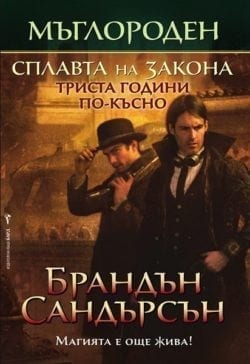 I also have an announcement that came as a surprise to me. It turns out that MISTBORN: THE ALLOY OF LAW has already been released, as of five days ago. In Bulgaria. So if you are currently somewhere near Sofia, Plovdiv, Varna, Burgas, Ruse, Stara Zagora, Pleven, or Sliven, you can go out and buy the book now. (Thanks to the Bulgarian reader named “I.” who emailed to tell me about this!)

Finally, some Mistborn readers from Austin, TX wrote in to let me know they have recorded a song from Zane and Vin’s points of view that is, appropriately, metal. With a lot of screaming. Not about puppies. I’ll let you form your own opinion.