Playing catch-up with the Writing Excuses podcast, we did episodes on both Writing Reluctant Characters and Combining Dialogue, Blocking, and Description. We also did a Q&A session at the Out of Excuses Retreat that touches on these questions: 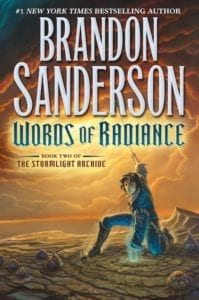 Tor.com has revealed Michael Whelan’s cover art for WORDS OF RADIANCE, the sequel to THE WAY OF KINGS. The cover is gorgeous, as always, and I love how the wraparound looks on it. Many thanks to Mr. Whelan for all his hard work!

Tor.com has also announced that the tentative release date has been pushed to March. I may have more to say on the reasons for this in the future, but it’s important that I get this book right. On July 24th I tweeted a screenshot of me starting the third draft.

I’ve missed mentioning a couple of THE WAY OF KINGS reread posts; you can find all of them here.

Tor.com also put up an excerpt of my novella “Shadows for Silence in the Forests of Hell” coming in the George R.R. Martin/Gardner Dozois anthology DANGEROUS WOMEN that will be released on December 3rd.

My Comic-Con interview with MTV Geek is archived here. The video is at the bottom of the page; I appear at the 1:59:38 mark. There’s also an extremely short preview of the STEELHEART book trailer right before I come on. The full trailer should be released fairly soon. And on that page you can also read the second excerpt from the book.

There’s also an interview with me about STEELHEART over at Big Shiny Robot.

My assistant Peter uploaded another Twitter posts archive. This one covers most of July.