WITHOUT A SUMMER + Updates

This week’s Writing Excuses podcast episode is called “Fake It Till You Make It” and in it Mary, Dan, Howard, and I talk about the things we do or have done to feel professional. 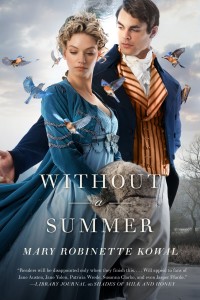 Mary’s new book WITHOUT A SUMMER is also out this week. The first two books in the series were excellent, so you’re sure to enjoy this one too!

Tor.com has put up chapter 2 and chapter 3 of my forthcoming YA fantasy THE RITHMATIST. (If you missed them, the prologue and chapter 1 are here.) The book comes out next month. Tor has also announced a mobile campaign involving (at the moment) the Wheel of Time and THE RITHMATIST. On your mobile phone text “EPIC” to 555111 to receive facts, trivia, and more (and no, that’s not an April Fools joke, though it was announced on April 1st). Or you can sign up at this link.

Irene at Tor also sent me this beautiful poster (the scale may not be obvious in the photo, but the frame is about 22″ by 30″) with a long quote from

chapter 4 of THE EYE OF THE WORLD. Robert Jordan truly was a master at making a story come alive before our eyes.

As I mentioned a couple of weeks ago, Tor.com has also started a reread of THE WAY OF KINGS in preparation for the release of the sequel, WORDS OF RADIANCE, hopefully later this year. Two reread posts have gone up so far, the first one covering the prelude and the second talking about the prologue. And the ebook of KINGS is still $2.99 for the next week or so.

And here’s the newest video of me writing a chapter from WORDS OF RADIANCE.