Assistant Isaac here with a cornucopia of cosmopoietic cartographies. (Yes, I searched the dictionary for that second word. I’m pretty sure it has something to do with worldbuilding.)

When I started working directly for Brandon, I pretty much finished up all my freelance projects and suddenly had my evenings free again. I had to learn to relax and watch TV shows. I learned my kids’ names and actually started doing things with them (see the Lego section later in this post). But the occasional freelance project does tend to sneak through. In fact, January and February of this year have a few non-Brandon books with my maps in them. Here they are! Cartography for the main course and Legos for desert!

A few years ago I received an email from David Powers King and Michael Jensen about the possibility of doing a map for their young adult fantasy. I was trying to clear off my freelance plate and was a little skeptical of being able to fit another map into the schedule, but I agreed to meet them at a local convention and hear about their book.

Over lunch they described what they were looking for and told me about their novel. The magic system intrigued me, and the authors’ vision of a map woven from threads to form a tapestry further hooked me. Before I was done eating, I was already thinking of ideas and making notes. So I agreed to make the map. I had a great time working with David and Michael, and I’m quite pleased with the result.

And now for the reveal! Here’s the color version of the map that appears in their book Woven, which was just released today by Scholastic.

As an aside, I’m happy to recommend the book, especially to young adults. The writing is tight, the dialogue crisp, the magic intriguing, and the characters fun. If you’re going to read the book, don’t bother reading its description. Wait for the twist round about the end of chapter 3. That’s what grabbed me. And you don’t have to worry about content on this one. It’s squeaky clean. might’ve been in Brandon’s class together, but I didn’t get to know him all that well till Worldcon of that same year. I’d graduated college but still spent evenings on campus doing a little writing of my own. I don’t remember how, but Brian and I started hanging out a few times a week in an alcove of the English building. We’d just sit there and write. Sometimes we read each other’s stuff, and man, Brian was good.

Fast-forward a few years. Brian and I kept in touch, and he called to tell me he had a book deal and he wanted me to do the maps and symbols. I was thrilled at the news, and doubly thrilled that he’d ask me to do the maps. That first book was Promise of Blood, a flintlock fantasy that I highly recommend.

Well, we added a new map and updated the previous ones for the sequel, The Crimson Campaign, and let me tell you, Brian just keeps getting better. Yes, I know I’m biased, but we hired Adam as Brandon’s new assistant a few months ago, and Adam and I were talking books, and he asked me, “Have you heard of Brian McClellan? I love his books.” Adam kind of drew out the word “love” in the way that’s usually reserved for saying you love sleek convertible roadsters. So I asked Adam to gush about The Crimson Campaign.

Adam here, ready and willing to gush about The Crimson Campaign. I was fortunate enough, in my former employ, to have a job that required a good deal of driving about. I was always looking for a good book to occupy my time, as driving can be tedious, when a friend suggested that I read Brian McClellan’s Powder Mage books. So I went to Audible and downloaded Promise of Blood and The Crimson Campaign. I was hooked. Very few books drag me in so quickly or so completely as did this series. I found myself taking longer routes in order to hear just a bit more. Or, after arriving at my destination, finding myself just sitting in my car to hear what happened next. Let me tell you, it was terrible for my productivity at work and it was worth every second.

Very few authors have given me that awful emptiness when finishing a book when suddenly you are ripped out of this amazing world. A world filled with; an awesome magic system, complex social constructs and cliffhangers so intense you feel your arms hurting. Only to be brought back to boring old reality. You all know what I mean and that’s why we love reading. I give this book series six out of five stars, a rating I have previously reserved for Patrick Rothfuss and our own Brandon Sanderson.

Not to rub it in or anything, but we got our hands on an early copy of the third book in the trilogy, The Autumn Republic, which will be released on February 10th. Watch for our thoughts on that one on release day.

Brian Staveley’s The Providence of Fire 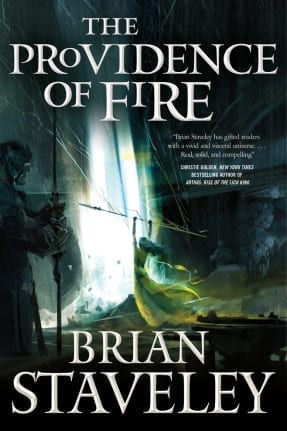 Unhewn Throne, The Providence of Fire, which I have to say is just a very cool title. Tor reached out to me to do the map in the first one, which was carried over into the second one. Here’s a post I wrote for Tor.com about the process behind the map.

Brian Staveley is top notch. His writing flows. I really care about his characters, and when I’m reading his novels, I feel like I’m in the hands of a master craftsman. I look forward to seeing where the series goes. It went over my language and brutality threshold a few times, so I’m going to put a strong content warning on this one.

No Starch LEGO Space and The Art of LEGO Design

One of the awesome parts of my job is getting to see the art-related things that come into our office. Months ago the good people at No Starch Press sent us a few of their Lego-themed books. I’m a sucker for Legos. Have been since this Lego set when I was just a wee lad. Everyone at work knows I love them too. In fact, when Brandon saw The Lego Movie, his review included the words, “and the part where the Dad shows up reminded me of Isaac.” I have since repented of my ways. Ask my kids. Now they spend hours in the Lego room playing and building, and they don’t have to worry about the Kragle anymore. So, everything is pretty dang cool.

I admit I didn’t read all the text in LEGO Space: Building the Future. That’s because I was trying to read it out loud to a five-year-old. It’s a lot of fun, but it’s not a bedtime story. The real genius of this book is that it’s an alternate history of space exploration. It starts with real events, portrayed in Lego, like Sputnik and the moon landing, and then basically asks the question, “What if the future of yesteryear’s space program looked a lot like the progression of the Lego Space line?” So the early years look like they could fit into Lego’s Classic space lineup (only coolor). If you’ve followed the evolution of Lego Space sets over the years, you’ll recognize the branding from some of the other eras too, like Blacktron and those white and blue sets that I’m not sure have a specific name.

Peter Reid and Tim Goddard are master builders. If you’re a fan of Lego Space, especially the Classic sets, do yourself a favor and lose yourself in this one for awhile. (As a side note, the Exo Suit portrayed in LEGO Space: Building the Future was adapted into a real set through Lego Ideas. I built it over Christmas break and had a blast of nostalgia hit me square in the face.

The Art of LEGO Design is a really great overview of building techniques. It doesn’t go into a lot of depth, but instead favors a broad approach that covers a lot of material, devoting a few pages to each style, technique, or what have you. The cool thing about this book is the photos taken from the author Jordan Schwartz’s collection and from other master builders’ original creations. Who knew that that piece could be used in that way? Who knew that there’s a whole subset of Lego builders who use the pieces to create mosaics? The level of creativity is astounding! Since I’m likely never to dive into Lego building as deeply as these masters, this is the sort of book where I can just sit back and enjoy the spectacle.

At the end of the day, I still have to try my hand at a few less time-consuming Lego projects, if only to stave off the building bug long enough so I can make some more maps. Behold my latest creation!