Alcatraz and Lost Metal News + a Question I Have for You

Hey, Brandon here with your Weekly Update. I am working my way through Defiant, the fourth book of the Skyward series. I’m about, bing! 66%, two-thirds of the way there. I have a few weeks left to finish that, so hopefully I will be on time. But if I’m not it’s not the end of the world.

A few other really cool things for you. I’ve been promising forever that we would have Alcatraz 6 out for you. Well, it’s actually starting to happen. In the state of Sanderson last year I warned you it probably wouldn’t be in 2021 but would be in 2022. And we are here and we’re getting ready for it. Part of what TOR wanted to do before releasing the sixth Alcatraz book is just repackage all of the previous books and rerelease them in paperback. And we have the first of these covers, Alcatraz 1 with the brand new cover. This is going to be coming out in spring of 2022. And then there’ll be one of these a month or so until we get to Alcatraz 6. Late summer is when I think we are going to be releasing that. So Alcatraz fans, rejoice. Your final book is coming. 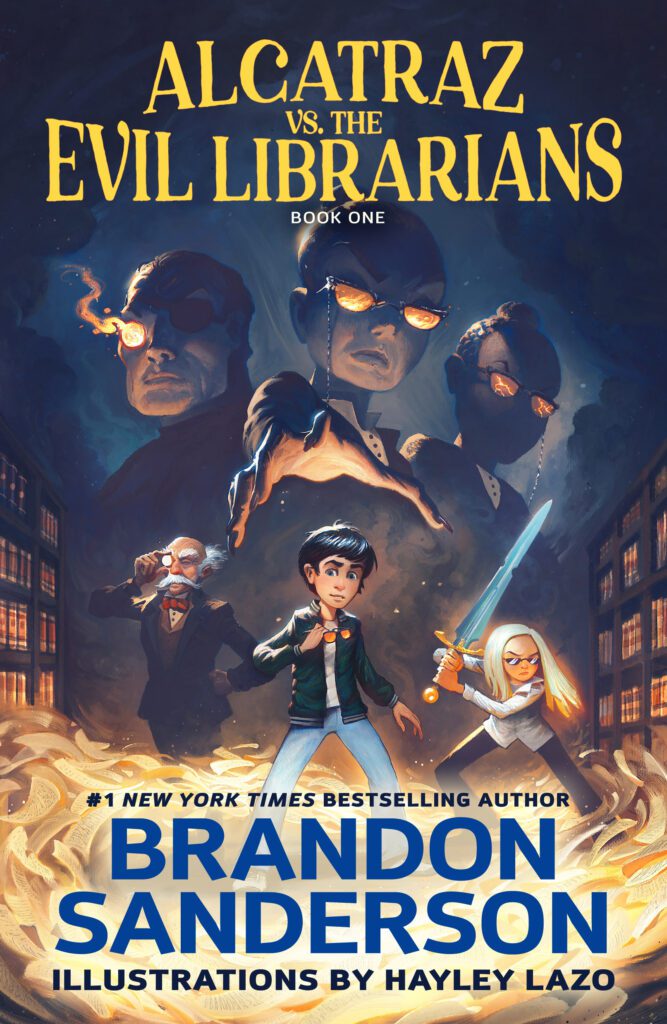 A few other cool things. Lost Metal is up for preorder. If you are interested in ordering the last of the Wax and Wayne novels, which will come out in November of 2022, that one’s up for preorder. So those are going to be two of my books that are coming out next year.

We also want to remind you of the spoiler stream. This is our twice a year we do an all spoilers stream where you can ask questions about anything relating to any of my books. Won’t promise to answer them, but we will be having spoilers in this. The stream is on Thursday, Thursday the 16th, that’s this Thursday, at 6 o’clock in the evening Mountain Standard Time, so where I am. So I’ll be answering spoiler questions. If you would want to ask one, please go to the Reddit thread that is linked here in the liner notes, and that will let you ask a question of the ones you most want answered. And we’re going to be taking most of the questions from that, though we will take generally a few as they come through in the stream as well. So show up on Thursday to see me answering spoiler-related questions.

Last thing is a request for you. For years, one of the things that I liked to do early in my career were annotations on my books. And I have just not been able to find time to do this. And Adam, Producer Adam of this channel, has suggested a method of making it happen. Things usually happen if I have deadlines and a formalized reason to do them. So he suggested that we do a Patreon focused specifically on behind-the-scenes with spoiler annotations of each chapter of books, being kind of the showpiece of them. We’ll release, like, an annotation, you know, maybe two a week, something like this, that I have filmed in a video capacity, because Adam has gotten very good at helping me do things via video.

I am uncertain on this. A couple reasons. The main reason is, I don’t know if people are that interested. How interested are you in my annotations and getting a couple times a week a three to five minute video just on a Patreon for subscribers only talking about a chapter and why I wrote it and things like that, of current books. We’d probably try to start this with the new Wax and Wayne book.

The other thing is, Patreon, it’s best served for smaller creators, I’ve found, to get more attention and things like that, which is not necessarily something that I need, which is why I haven’t ever started up a Patreon. But if it were focused specifically on kind of something like this, a good that we’re not sure if people want, a thing I could provide, but it’s really kind of up to you if you are interested.

So we’re going to have a poll. Would you be interested in paying $5.00 a month for a couple of annotations every week? And is this something that excites you, interests you? Let us know. We like to listen to you. We don’t like to overwhelm you with things to pay for and do. So we want to be spending my efforts, my time, and your money in places you would like to see me spending my efforts and time.

So hey, thank you, as always, and we will have the State of the Sanderson coming very soon for you. And I look forward to you reading that when we release it in about a week or so.