Call to Adventure: The Stormlight Archive

Adam and Isaac here. Several months ago, Johnny O’Neal from Brotherwise came out to Utah to show us an early test copy of Call to Adventure: The Stormlight Archive. We had a blast. The artwork was incredible, the gameplay was engaging, and most of all—at least for me (Adam)—it was fun to craft my very own character on Roshar.

After several months of working with Johnny, Chris, and the entire Brotherwise team we’re excited to say the preorders open today for the first official board game based on The Stormlight Archive. Isaac, our art director, and Karen, our continuity editor, have provided feedback on the over 120 pieces of original art commissioned for the game and they are incredible. Here’s a look at some of them: 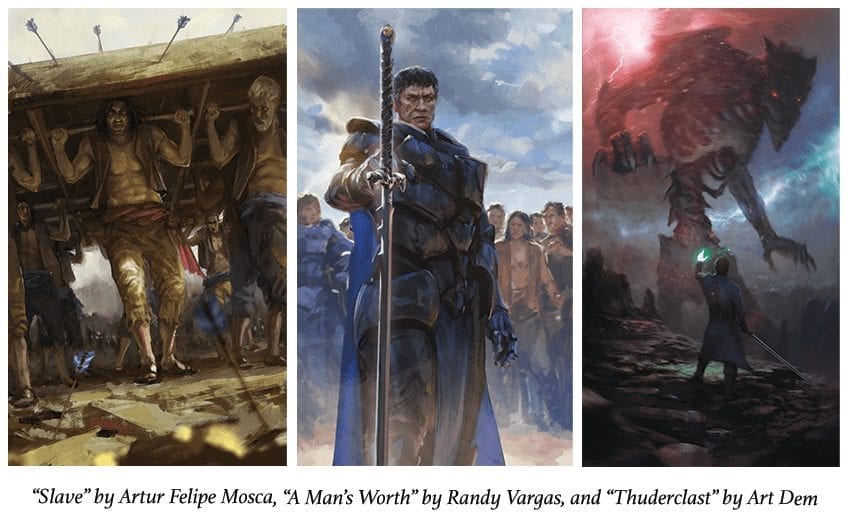 Isaac here. I’ve liked Brotherwise’s games ever since I picked up Boss Monster several years ago. I didn’t know much about the game company, and they hadn’t approached Dragonsteel yet about their Stormlight Archive game, but even then, I was impressed with the quality of the game and the quality of the art. When they did cards in homage to Brandon and several other fantasy authors, I started to realize that not only were their games fun, maybe the people behind the games also had similar reading tastes.

So when Brotherwise approached us about theming a version of Call to Adventure to the Stormlight Archive, we didn’t have to deliberate very long about it. Now that they’re about to release the game, and I’ve had a chance to play the new version with Adam and Johnny, I have to say that partnering with Brotherwsie has been an excellent experience. The game is fun and cool, and the art…! If I open my mouth and get started on the art, then I’m not sure if you’ll get me to shut up about it. Let’s just say that some of my favorite Stormlight pieces ever are found in this game. I think you’re going to love it.

A Bit About the Game

Adam here again. As I said before, The Call to Adventure game system invites you to build your own character in Roshar. You begin with an Origin, like a Shin farmer or an Alethi warrior, then work toward your Destiny. You could belong to any one of the ten Orders of Knights Radiant, or you might secretly serve Odium. Over the course of the game you gain traits, face challenges, and ultimately confront Odium.

There will be two editions of the game. The core version contains everything needed for up to 4 players. It’s coming to game stores in late June. The Deluxe Edition is identical to the core version in terms of gameplay, but contains some nice extras: a book-style package, two foiled alternate-art cards, and A Worldhopper’s Guide to Roshar. 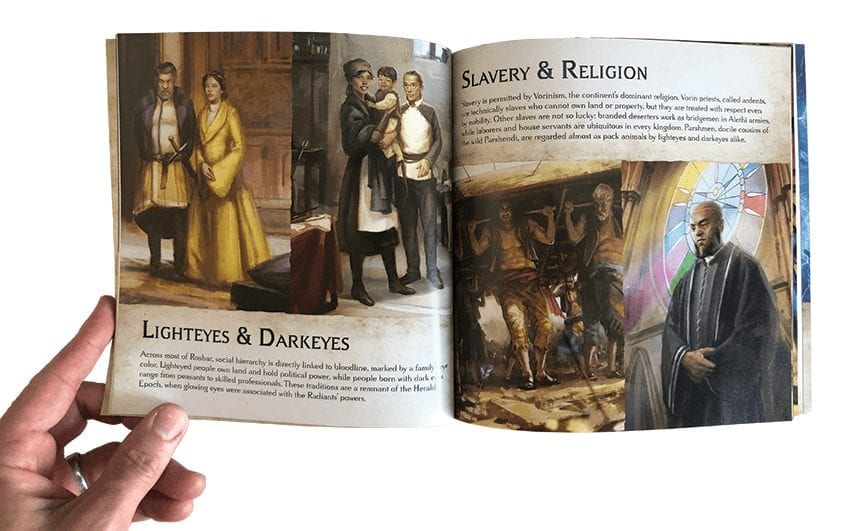 This 48-page booklet will only be available as part of the Deluxe Edition. It compiles information about the nations and cultures of Roshar, the Orders of Knights Radiant, and the forces of Odium. Most importantly, it’s a showcase for the game’s artists to share their vision of Roshar. Many of the artists—from Randy Vargas and Petar Penev to Ari Ibarra and Antti Hakosaari—are avid fans of the series and it’s been a real pleasure to see their excellent work on this project.
Pre-orders will launch today at 11:00 a.m. MDT here.

We hope you enjoy creating your own adventures in Roshar. For more details, visit BrotherwiseGames.com!

May 25, 2020
Tags: Board GamesStormlightThe Stormlight Archive