Everyone, I come to you today deeply humbled and appreciative. Over the weekend at Worldcon in San Antonio, I was honored with not one, but two Hugo awards. Though I’m thrilled to have Writing Excuses finally win after several years of losses, I’m beyond flattered to have been given a fiction award in the novella category for The Emperor’s Soul.

I shared a little of what I was thinking during the acceptance speech, but I prefer to keep things like that short. I’ll go into a little more depth here. Many of you know the story of how I discovered fantasy novels as a young man. My first experience with fandom isn’t one I’ve talked about as often.

I was seventeen or eighteen when it happened. A teacher (a different one from the one who handed me my first fantasy novel) waved me over after class. He’d noticed a flyer for a science fiction convention called Andromeda One, which had a writing contest. Now, this teacher was not a fan of sf in the least—he had us reading Faulkner—but he was a teacher, and an excellent one. He held up the sheet to me and said, “You should check this out, Brandon. I think you’ll like it. And try submitting one of your stories.”

I’d never heard of literary science fiction cons before. I figured it was something like a Star Trek con. I was wrong, as this was something so much more. A welcoming home, a place for thoughtful discussion, and a place of learning. I spent that weekend in panels, listening to REAL writers who wrote stories like I liked to read. Katherine Kurtz was guest of honor, and I remember my utter amazement at how—when I asked her a question about writing—she sat me down and didn’t just answer, but talked to me and encouraged me for a good half hour while she waited for her next panel.

I found my home among these people. I was immediately adopted into the fold by the other teens there, and was carted from one activity to another by people whom I’d never met before that day—but who wanted to make certain I had a good convention experience. It was amazing.

As I mentioned, the convention had a student writing competition. In fact, I remember the exact words of the flyer my teacher showed me. It had a line I have never forgotten, written in big letters, proclaiming, “Andromeda One student writing contest! Join us as we search for what may be future Hugo and Nebula Award winners!”

I managed to win that contest. Granted, I think there were only five or six submissions. But I actually won. The award was a certificate, a $50 savings bond, and a handshake. The presenter said to me, “Keep writing, kid! Maybe someday you’ll win yourself a Hugo.”

Ladies and gentlemen, almost twenty years later, here it is. My Hugo. 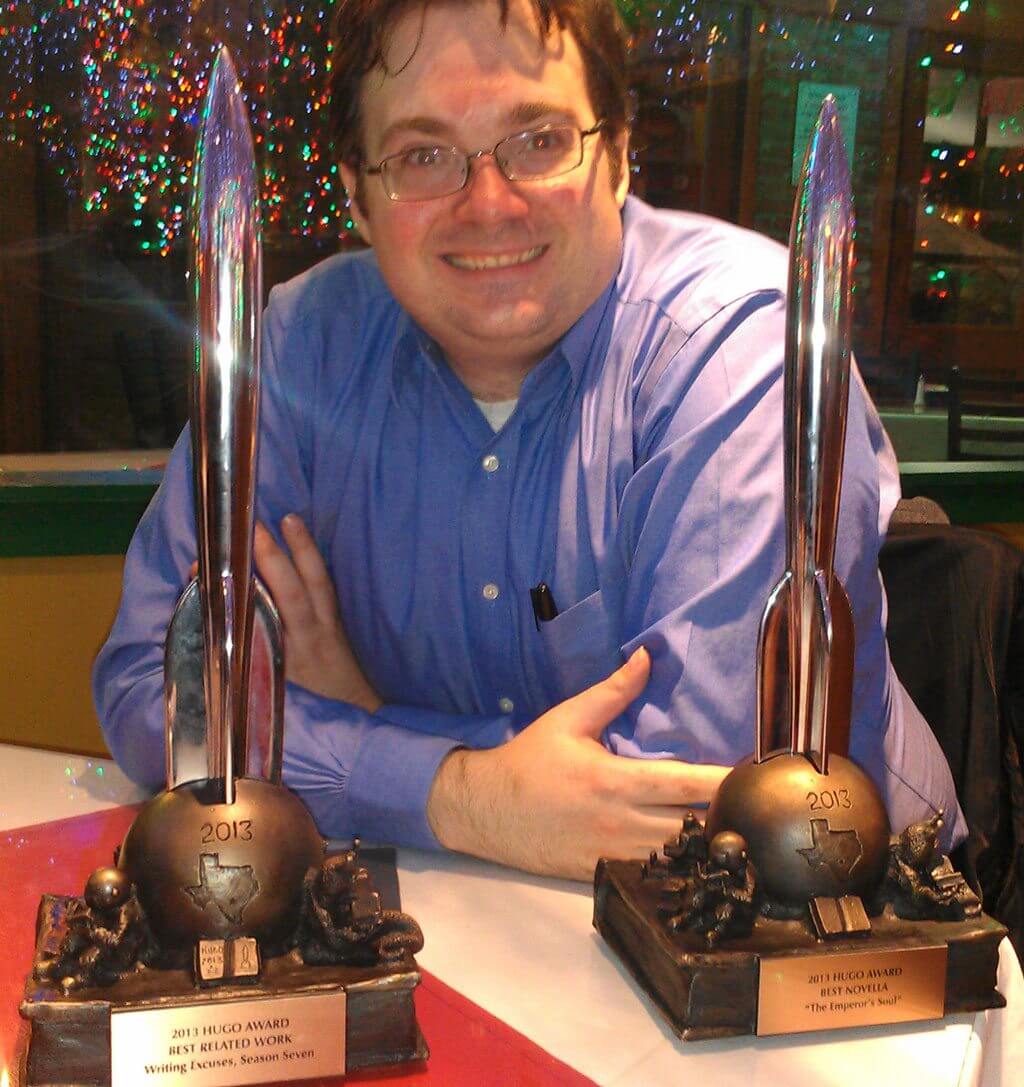 How can I explain my emotions? I’ve had writing successes, but for twenty years—ever since I saw that shiny award sticker on the copy of Ender’s Game I was buying, and looked up what it meant—this has been one of my profoundest, most personal goals in life. To write something worthy of that beautiful statue. I haven’t talked about it a lot because I believe strongly in the integrity of the award, and believe authors should avoid doing more than making people aware of deadlines and eligible works. But now I can talk about it.

The Emperor’s Soul is by far the best short piece I’ve ever written, and it rivals the best of my novels in quality. It is the perfect piece to win, one I’m exceptionally proud of. I’m amazed, gratified, honored, and deeply grateful that so many people found it worthy. This is the perfect news to use as the first post on my new website, which you may have noticed has finally come online.

Thank you to all who have believed in me and my writing. Thank you to my 3-year-old, who—upon seeing me on the video stream from home—apparently said, “Why is Daddy on the big TV?” Thank you to Emily for her love and support, to my parents for all they have done for me. To people like Moshe Feder who discovered me, to the Tachyon folks who did such a great job editing and packaging this book, and also to my wonderful agent and my dedicated assistants.

Most of all, thank you to all who voted. Thank you so very much. 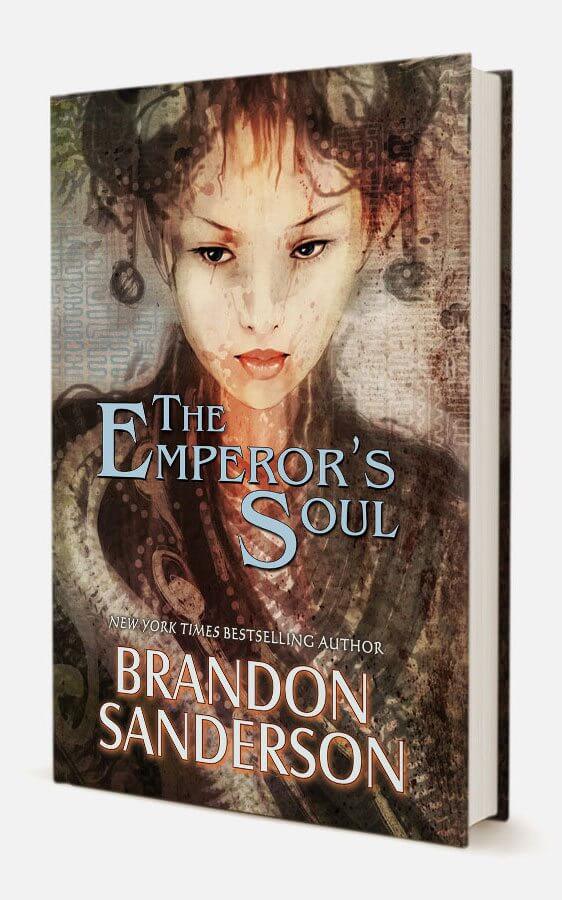 They are a little pricy at $25 (on sale for $20 until the end of September), because of the nature of doing small hardcover print runs—this is intended as a collector’s item. The trade paperback will continue to be sold at many wonderful locations, as will the ebook. All print copies entitle you to a free copy of the ebook as well, mailed to you directly by me in a DRM-free format. (Details here at the bottom of the page.)

So now what? Well, onward, I guess! Some of the masters of this genre collected a good dozen or so Hugos during their lifetimes. I’ve got a lot of work to do. 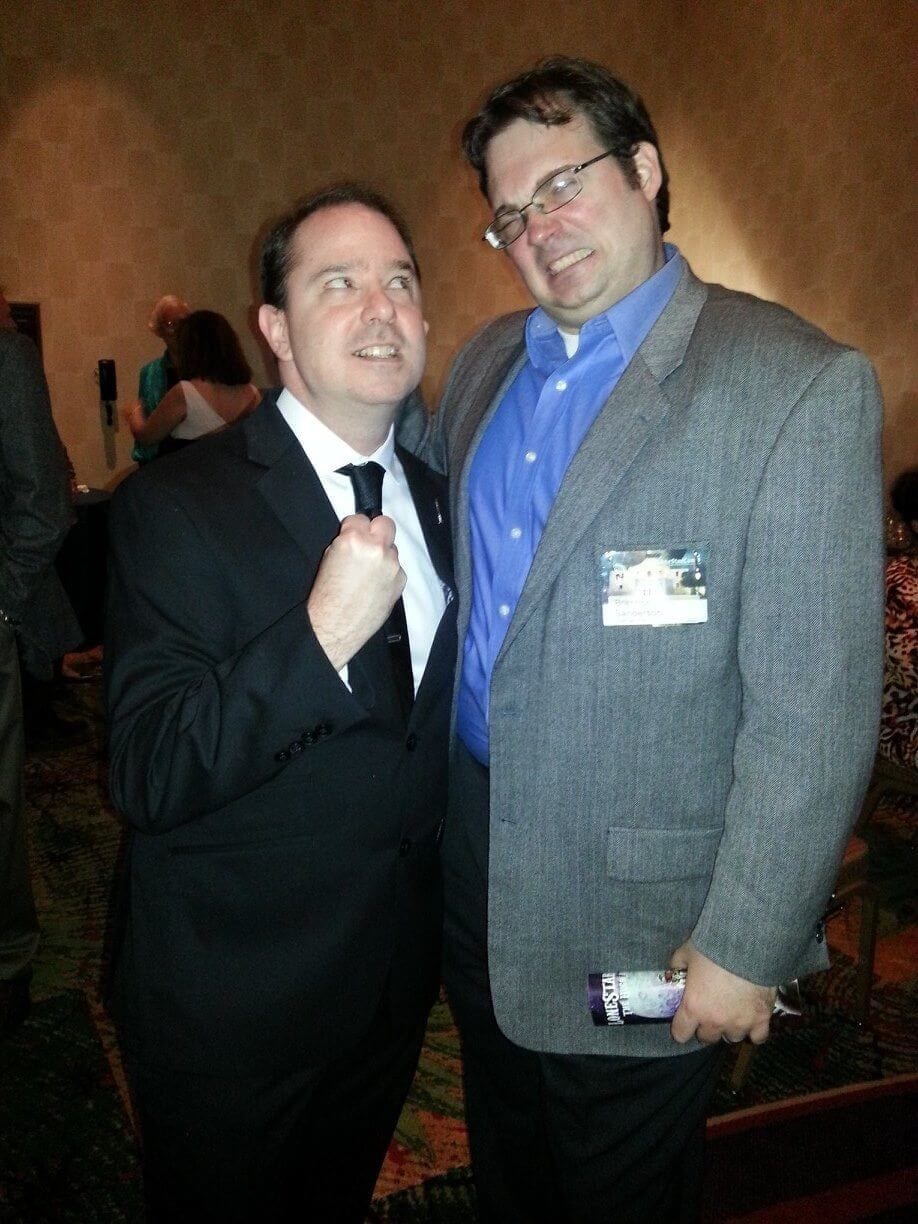 John Scalzi and Brandon Sanderson before the ceremony. Photo by Joel Phillips. 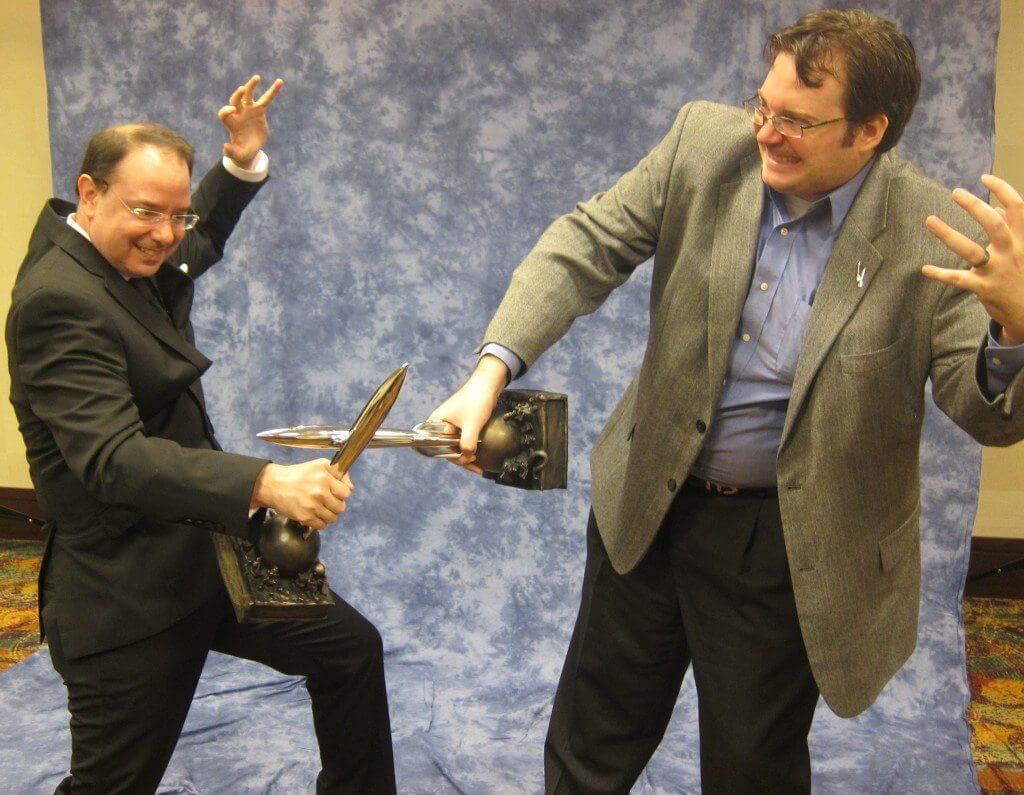 John Scalzi and Brandon Sanderson after the ceremony. Photo by Eddie Schneider. 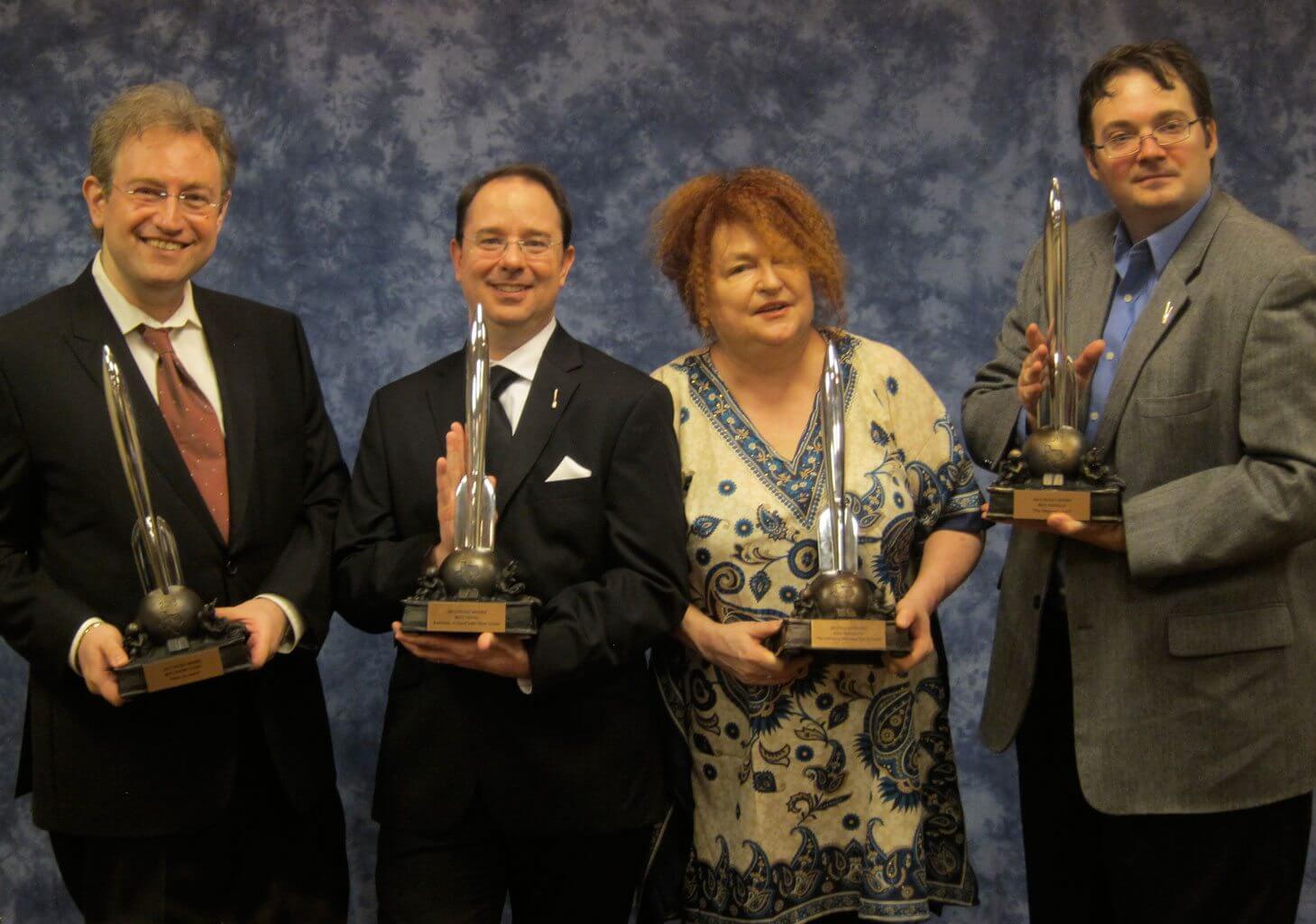 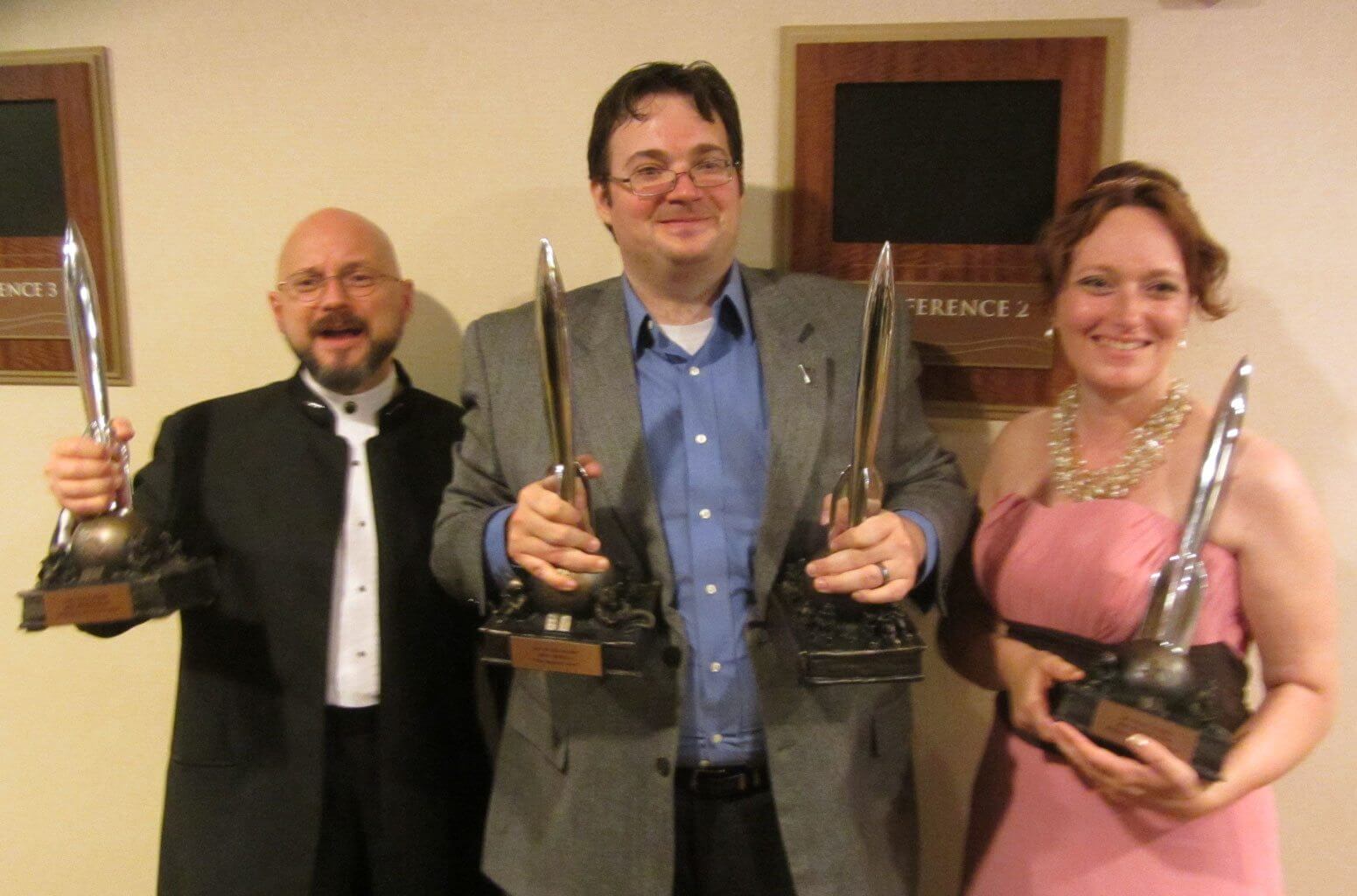 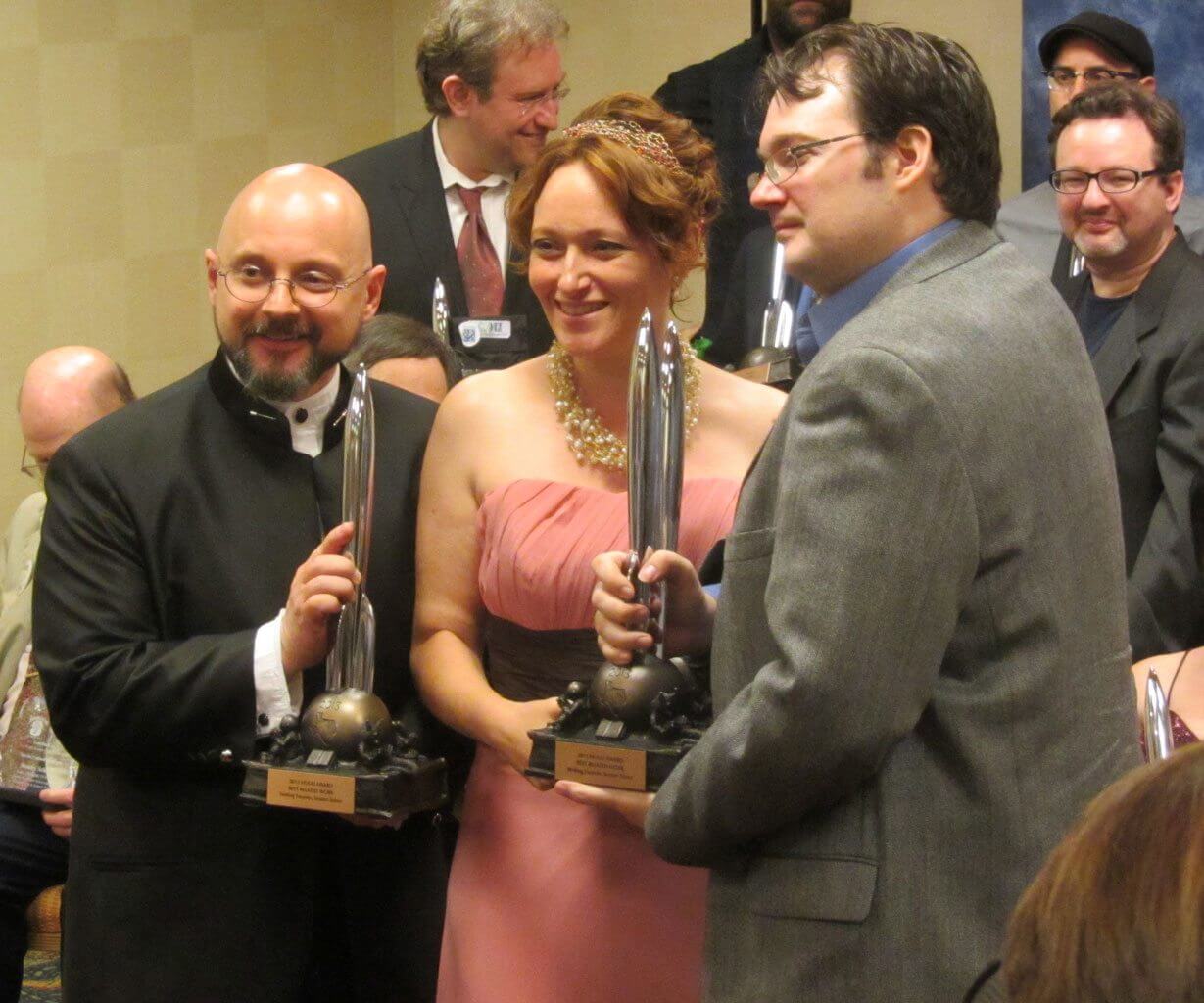 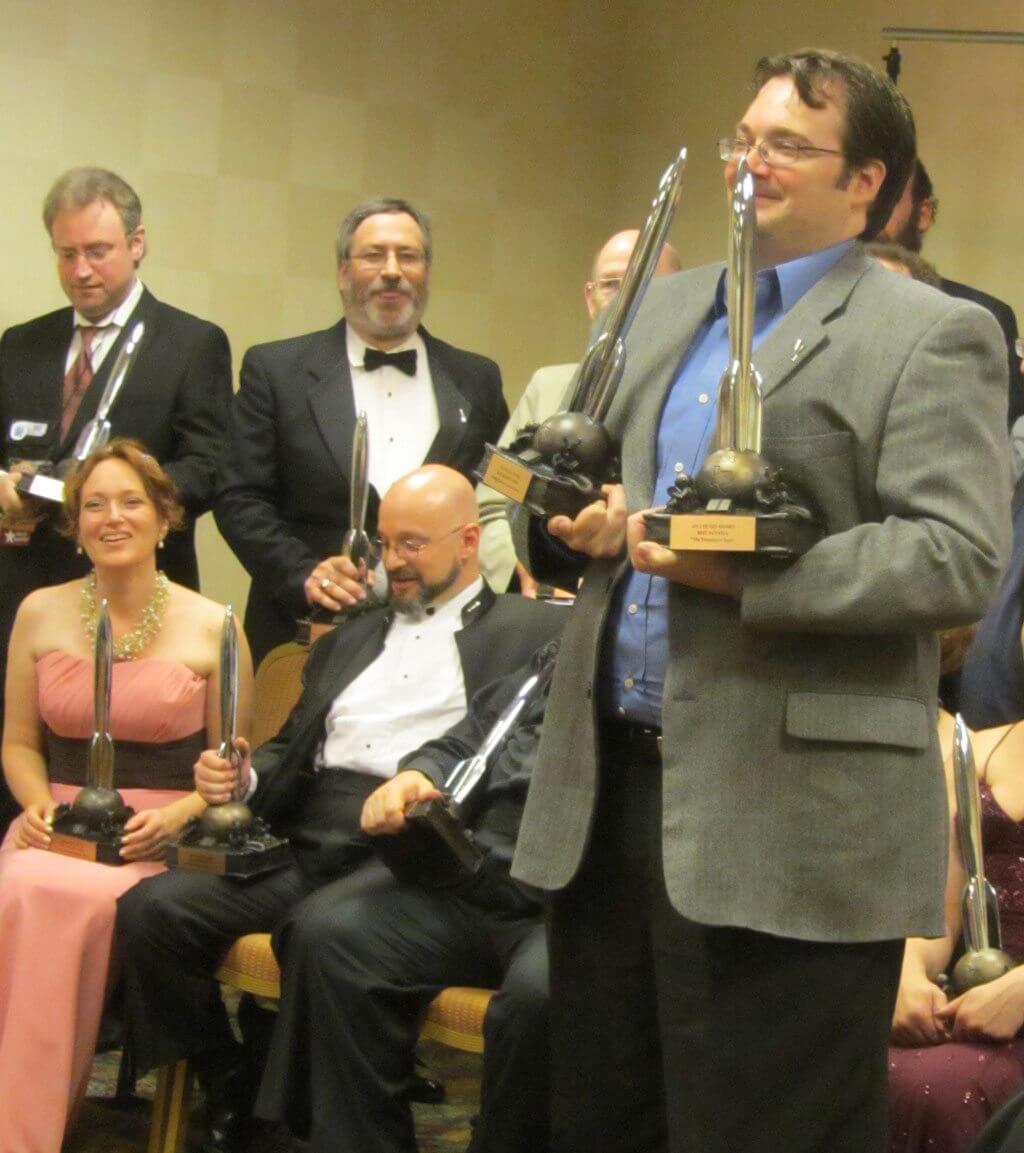 Call to Adventure: The Stormlight Archive
May 25, 2020