If You Missed the Kickstarter + Legion Paperback

We’ve heard from some of you that you didn’t find out about The Way of Kings leatherbound Kickstarter until after the campaign had ended. We’ve opened a BackerKit store for those who might’ve missed the campaign or were unable to back it while it was ongoing.

You can buy bundles that are very similar to the various tiers that were originally available, but please note that any leatherbounds bought through here will not arrive until 2021, as all of the 2020 leatherbounds were claimed during the campaign.

The BackerKit Pre-Order Store will only be open through September 7th. On September 8th, you will be charged for your pre-orders and shipping. Afterward, we will figure out the quantities we need to order for all the goodies and begin the production process.

Legion: The Many Book Covers of Stephen Leeds

With everything that’s been going on here at Dragonsteel, we missed posting about it on Brandon’s social media but, Legion: The Many Lives of Stephen Leeds came out in mass market paperback on July 28th and sports a snazzy new cover for this edition. I also want to point out that there is also now an ebook edition for the third Legion novella, Legion: Lies of the Beholder, along with—you guessed it—a new cover to match that of the mass market edition of Legion: The Many Lives of Stephen Leeds, which collects all three of Brandon’s Legion stories between the pages of one book.

After several discussions with Tor, we decided that this go-round we would embrace the mystery/thriller elements of the novellas, showcasing them on the new covers. We hope you like the result. Everyone here at Dragonsteel feels like Tor has done an amazing job. 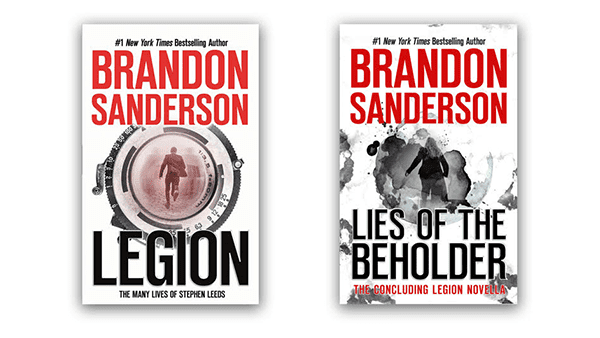