[Note, I’m still on tour for Shadows of Self. If you’ve somehow missed the fact that I have a new book out, then read these blog posts, and come see me on tour! Events are listed here.]

Last year, we got a very intriguing offer. A production company in Minneapolis was filming a series on mythology for the History Channel, and they wanted to know if I’d be interested in appearing as a guest.

My initial inclination was to turn down the request, as my time these days is 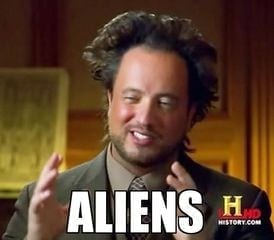 at a premium. Also, I wasn’t sure if I wanted to be on a program reminiscent of the one done with the “aliens” guy.

However, talking to my agent, I decided to just roll with it. It was a fun opportunity, and most importantly, they were contacting us in relation to my professor’s hat—they wanted an expert on mythology, storytelling, and what makes human beings intrigued by certain types of stories.

Now, I’d been on the small screen before. Including that fateful moment where I appeared on a local news channel in front of a bunch of stormtroopers, beside the actress who played the evil Kryptonian woman from Superman 2 back in the day. Ah, the places my life has taken me…

Well, I’m pleased to say that despite my reservations, the experience of filming for this series (titled True Monsters now, instead of True Myths as in the original pitch to me) was excellent. Though the series pitch was about whether or not these mythological monsters are real (hint: they’re not), the questions directed at me were exclusively within my particular wheelhouse. We talked about why people want to believe in myths, why they tell stories, and why we consider some myths real (like my own religious faith) while we disregard others.

It was actually a very fun shoot, with me getting to be very professorial and talk about things I love and am passionate about. Now, upon writing this, I can’t say how it turned out. I haven’t seen a cut, and who knows how they spliced me in—or if they even ended up using me at all! However, I did find out that a certain Patrick Rothfuss was also interviewed, so it should be a fun program to watch either way.

Perhaps this thing will come together in a way that makes it seem like I’m telling you all that bigfoot is real. (And, in so doing, help prove the complaint that sensationalism is infecting our educational programming.)

However, my experiences with the producers are making me lean the other direction. I’m anticipating a fun program, which might toy with the real-world explanations of why certain myths started, then dig into what makes human beings so fond of telling stories to one another.

And if not, well, let me just get this out of the way:

True Monsters will be airing on the History Channel on October 9 (that’s today) at 10/9c.