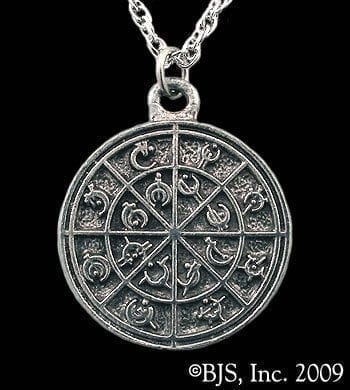 Did you know you can get this cool Allomantic Table Medallion and other jewelry in my store? There are also books signed & personalized by me (including hardcovers of The Emperor’s Soul and this year’s “Firstborn”/”Defending Elysium” combo), T-shirts, Feruchemical Table prints, and Allomantic symbol decals. If you’re interested in giving any of those things as a gift this holiday season, be sure to check the holiday shipping deadlines.

This past weekend in New York I did an event with James Dasher and Christopher Paolini where we talked about the genre and read from each other’s books. You can see the full video here. (Yes, Christopher’s microphone issue gets solved early on, so don’t let that bother you.)

Thursday this week I’ll be signing and playing Magic: The Gathering at the Orem Dragon’s Keep store. For details on that, see the event listing.

Here are two other stores that have Steelhunt codes in some of their books:

Steelheart and A Memory of Light have both made it to the final round of voting in this year’s Goodreads Choice Awards. If you’re going to vote, please vote for the book you feel is the most deserving, whether it’s one of mine or not!

This week’s Writing Excuses writing advice show has another episode that we recorded with a live audience at Gen Con. It features Aeryn Rudel of Privateer Press talking with me, Mary, and Howard about editing.

Tor.com’s reread of The Way of Kings hit chapter 45, the first appearance of Shadesmar. They also have a post up talking about Surgebinders, the Knights Radiant, and Windrunners. Also the ebook for The Way of Kings is still on sale for $1.99 on the US Kindle store and the iBookstore. That promotion could be over at any time.

Do you remember this cool fan-made trailer for The Alloy of Law?

Some of the people who were involved in making that video are currently involved in a Kickstarter campaign for a video game they’re making set in a world they’ve created. Check it out.