For those who missed the news and are wondering about the A MEMORY OF LIGHT ebook, I talked about it at the bottom of my blog post last week.

Patrick Rothfuss’s Worldbuilders charity is auctioning off a signed first edition hardcover of THE GATHERING STORM. The auction includes dragon and sword pins from Badali Jewelry and a T-shirt of your choice from Ta’veren Tees that will be signed by the members of Team Jordan. Worldbuilders is a great charity and they also have lots of cool stuff you have a chance of getting by donating, so check out Pat’s blog posts about it.

On this week’s episode of the Writing Excuses podcast, Mary, Howard, Dan, and I discuss the Hero’s Journey. This is an episode that we’ve talked about doing for years and have finally gotten around to. Enjoy!

For Mistborn fans, World of Warcraft is adding a “Survivor’s Bag of Coins” to the 5.2.0 patch. See details here. I think this is awesome! (Also note that the Mistborn action RPG MISTBORN: BIRTHRIGHT is still in development, but right now it looks like the release might get pushed back to 2014 instead of this year. There hasn’t been an official announcement though.)

On my tour I’ve been stopping to sign books in airport bookstores as usual. Years ago some of my fans nicknamed this “Brandalizing.” Grammar Girl did a quick blog post about the term this week.

Here’s a video of Harriet reading the wind scene from A MEMORY OF LIGHT at our signing this past weekend at the College of Charleston. Thanks, Jessica Crout! The Addlestone Library there is the home of Robert Jordan’s papers. They had on display this very early draft of THE EYE OF THE WORLD with Jordan’s handwritten edits on it.

Last week I appeared on Wired’s Geek’s Guide to the Galaxy podcast talking about AMoL. And USA Today had a cool Robert Jordan sidebar in the paper. Here’s a photo: 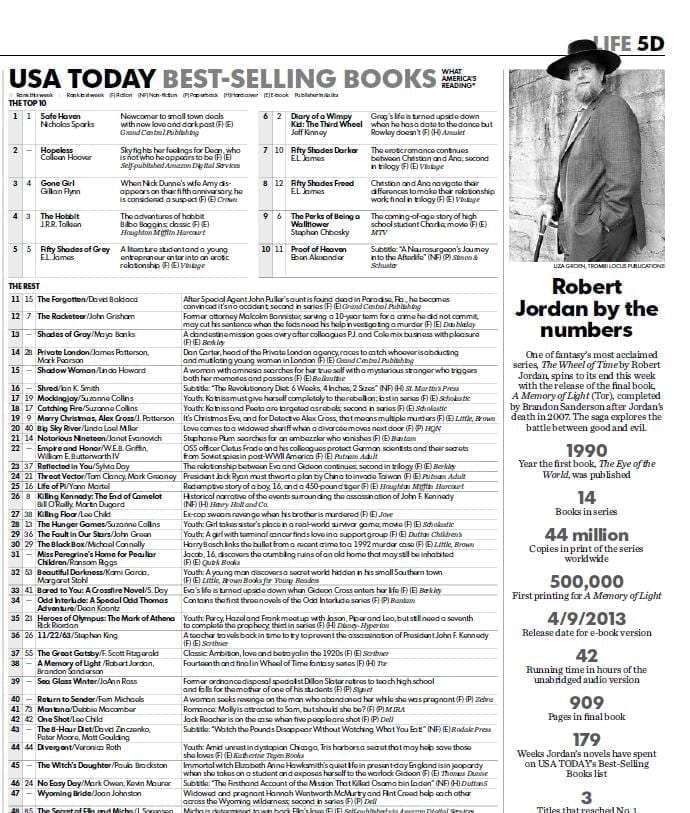 My assistant has also uploaded two more Twitter archive posts. [Assistant Peter’s note: The first one is spoiler free, but there are plenty of spoilers for A MEMORY OF LIGHT in the second one. Brandon tries to keep spoilers out of his Twitter feed, but there are major spoilers in several of the questions that Brandon answered.]

We’ll find out how A MEMORY OF LIGHT did on the New York Times bestseller list later today or tomorrow, but we already know it hit #1 on the Ingram and National Indie lists. (The USA Today listing above was for the week before the book came out.) We also made Shelf Awareness’s Image of the Day for January 16th, which you can see here (taken at Joseph-Beth in Lexington): 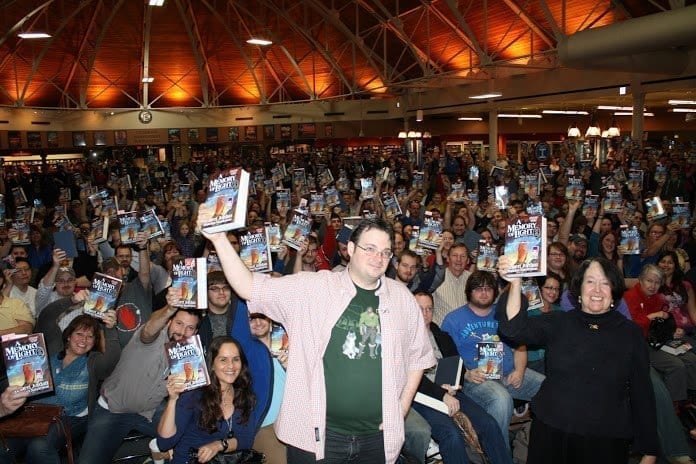 Thanks for all of your support, and I hope you’re enjoying the book! It has been an honor.