(NOTE: Scroll all the way down for my booth schedule.)

(PLEASE NOTICE: The Friday spotlight panel starts at 1:00, not at noon as previously announced!)

This is the first year I’ve been a Special Guest at SDCC. On top of that, Gen Con has me as their Author Guest of Honor and Dragon*Con is bringing me in (for the third time) as an invited guest. With this conflux of awesome conventions happening, I wanted to do some special things. For years, I’ve wanted to do con exclusives—something to make it worth the effort for people to go out of their way to come see me. And so, this year, we have some awesome things going on. Read below for an expanded list of my SDCC activities.

I do realize that not everyone can make conventions like this, and I’ll do my best to make some of these items available to those of you who can’t come. However, I’d like to make the con experience a great one for all involved. In addition to simply attending SDCC this year, I have a booth (for the first time) provided for me in Artist’s Alley (#II-10). Isaac, who does much of my artwork, and his wife have decided to come and run the booth. I’m hoping this will prove lucrative enough for them that we can do things like this in the future. So please, do come stop by and see us. We will have freebies every day and awesome merchandise. If you know someone who is going to SDCC, send them by to pick something up for you!

As a complement to the Allomantic Table we offered a few years back, we are bringing 100 signed, numbered copies of the matching Feruchemical Table. This wonderful artwork by Isaac Stewart is printed using archival ink and paper. There will be a limited edition of 300 fine art prints, all signed by both me and Isaac. They’re absolutely gorgeous. We’ll be selling numbers 101-200 at SDCC. The other two hundred are going to be for different cons and, most likely, for a small internet sale after the cons are over. Once these are gone, they’re gone—though Isaac may do a smaller, unsigned poster-style print afterward. (Like we did with the Allomantic Table.) 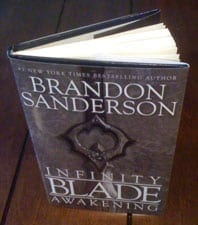 EXCLUSIVE TWO: Infinity Blade: Awakening Hardcover
Price: $20
This novella, which I wrote for the Infinity Blade iOS game, never had an official print release. We’ve done a limited edition hardcover, signed and numbered, of 200 copies. These are signed by myself, Donald Mustard, and Geremy Mustard. (The founders of ChAIR Entertainment, developers of Infinity Blade.) Working on this story was a blast—it was something I did with friends, as opposed to something done for a buck. The response to it has been stellar. If you’re a fan of the game, or you enjoyed the novella, this is a very unique item. Once these are gone, they’re gone. We will be bringing numbers 1-100 to sell at SDCC. (Others will go to Gen Con and Dragon*Con.) 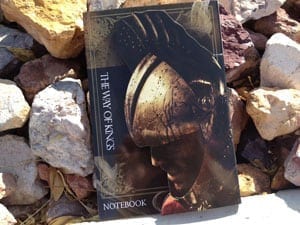 EXCLUSIVE THREE: The Way of Kings Taiwanese Notebooks
Price: Free at my solo panel!
During my trip to Taiwan earlier this year, I was blown away by the awesomeness of my publisher there (Fantasy Foundation). They released The Way of Kings in a cool boxed set with the novel in two parts and one of these nifty notebooks as a promo. They’re mostly blank inside, with some planner-like notations on some of the pages. I was so in love with these, I asked if I could have a few to give away on my website. They gave me a whole box! So I flew them back as one of my pieces of luggage, and I’ve saved them for SDCC. As these were given to me for free, I’m going to pass them on to you for free. I’ll be giving them away at my solo panel at SDCC to the people who arrive first.

My plan is to arrive a little early and distribute them to the people in line. If I am late (as I sometime am) I’ll give them out to the first rows of people seated at the panel, starting at the person in the left front seat (if you’re facing the stage) and working my way right. Then I’ll move to row two, and keep giving them away until I run out.

I believe I have around fifty of these, but Isaac has the box and is driving to San Diego as we speak. So I can’t guarantee numbers. I suggest that if you want one of these guys, you come get in line for my panel early. (This panel will include me doing a Q&A and a reading. Including, hopefully, a short reading from A Memory of Light!) 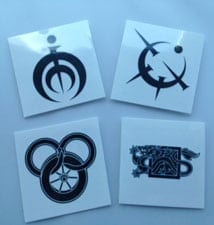 EXCLUSIVE FOUR: Wheel of Time and Mistborn Temporary Tattoos
Price: Free at my booth!
Each day on Thursday, Friday, and Saturday Isaac and Kara have a promotional temporary tattoo to give away. (A different one each day, while supplies last.) Two are Allomantic symbols, and one is the Snake Wheel logo from the Wheel of Time. (They also have the dragon symbol from the Wheel of Time, but that one misprinted to be tiny. They’ll give those away too, but they look a little silly printed as small as they are. Be sure to ask for one anyway—and I believe they’ll give those away on any day.)

Isaac and Kara paid for these themselves as promotion, so I’m hoping that when you guys stop by the booth, you have a look at the T-shirts they’ve brought. (A Wheel of Time shirt and a brand new Way of Kings shirt that I’ll talk about next.) Isaac is an awesome artist, and he’s put a lot of work into the Feruchemical posters and the shirts.

EXCLUSIVE FIVE: Szeth Shirt (from The Way of Kings)
Price: $20
Launching at SDCC will be the new Szeth shirt from The Way of Kings. Wear the Assassin in White proudly on your torso. 🙂 This shirt is based off of the concept art Ben (Inkthinker) McSweeney did for Szeth when I pitched the series to Tor. I loved his rendition of Szeth so much, we ended up using Ben’s image for the Szeth chapter icon in the books.

These will be for sale eventually on InkWing‘s website. But for now, the place to get them is SDCC! 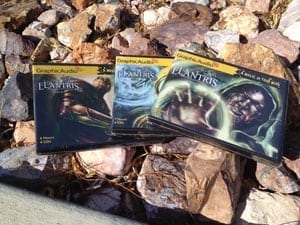 OTHER THINGS FOR SALE
We will have copies of almost all of my books for sale at the booth, along with another T-shirt (the Matrim Cauthon by Seamas shirt from Ta’veren Tees). Prices for those will be the same as online. In addition, we’ve packed up a few foreign language editions. There are only a few of these, but I believe there is at least one book each in French, Japanese, Chinese (complex), and Spanish. So if you’ve been wanting an edition of my books in a different language, come early and snatch your copy up! There’s also one set of the GraphicAudio version of Elantris. 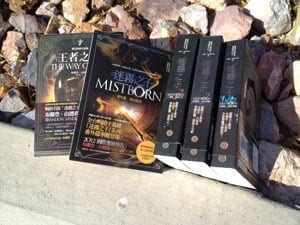 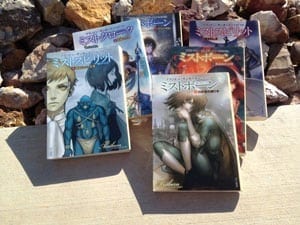 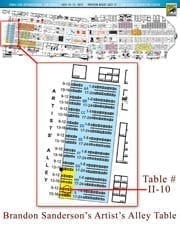 It’s possible that I will be hanging around the booth at other times, such as Wednesday Preview Night. (I will tweet to say when I am.) When I’m not there, Isaac and Kara WILL be, so if you want the exclusive items, show up earlier in the day. (I will leave signed books behind when I leave.) Also, feel free to tweet me to get something signed.

Once again, we’re hoping this will be a successful experiment. I’ve avoided bringing merchandise to conventions like this because of the hassle. If people enjoy these exclusives, and the booth makes enough money to compensate Isaac and Kara for their time, there’s a good chance we’ll continue doing this in the future.

6:00-9:00 p.m., Artist’s Alley Booth #II-10
I may go to my booth sometime during these hours; Isaac and Kara will be there. Follow me on Twitter and Facebook to see if I will make it.

1:00-2:00 p.m., Room 25ABC (NOT AT NOON AS PREVIOUSLY ANNOUNCED)
Spotlight on Brandon Sanderson
Author, educator, and Comic-Con Special Guest BRANDON SANDERSON talks about his growth from a nonreader in his youth to becoming one of the most popular fantasy writers working today. Sanderson’s books include his own Mistborn trilogy and his continuation of the late Robert Jordan’s Wheel of Time series, which wraps up this year.
That’s the official description; I will most likely read from a forthcoming book and take some audience questions.

3:30-4:30 p.m., Room 6A
Epic Fantasy War
We’ve all seen the signs: war is coming; and this winter, hobbits will learn that one should never laugh at live dragons. Join the top names in fantasy fiction as they discuss how the key to writing a real epic fantasy novel lies in the word “epic”—which doesn’t just mean ambitious in scale, scope, and size. Epic fantasy helps us decipher the bigger mysteries of life. Even though there might be dragons (and magicians; horselords and warlords), every word, and every detail of the world, must resonate on a fully human plane. Legendary editor Betsy Mitchell gets epic with panelists Brandon Sanderson (The Alloy of Law); Raymond E. Feist (A Crown Imperiled); Robin Hobb (City of Dragons); N.K. Jemisin (The Inheritance Trilogy); Christopher Paolini (The Inheritance Cycle); Rachel Hartman (Seraphina); Patrick Rothfuss (The Kingkiller Chronicle); Heather Brewer (The Legacy of Tril) and Lynn Flewelling (Casket of Souls).

Evening: Maybe a Magic draft in my hotel somewhere, if this is possible. Stay tuned to Twitter and Facebook for details.