This week the Writing Excuses podcast has a “project in depth” episode on Mary Robinette Kowal’s novella “Kiss Me Twice,” which was nominated for the Hugo and Nebula last year. Give it a listen, though you’ll probably want to read the novella first.

Tor.com had a couple of The Way of Kings articles last week. First was one on the ecology of Roshar, and then their reread reached chapter fifteeen. 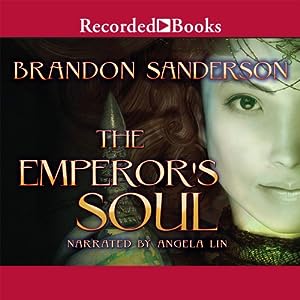 Every June, publishers like to highlight audiobooks. This year they’re doing it with the hashtag #ListenLit on Twitter.

All of my books are now out in audio editions. There are two different kinds of audiobooks of mine that have come out: standard unabridged readings (from Macmillan Audio, Recorded Books, and Audible) and full-cast dramatizations (from GraphicAudio). Which type each book has depends on how contracts were negotiated.

Recorded Books has unabridged readings of Elantris, Warbreaker, The Emperor’s Soul, and all four Alcatraz books.

GraphicAudio has full-cast dramatizations of Elantris and Warbreaker. They’ve also recently acquired rights to give the same treatment to Mistborn trilogy but I don’t know when those will be coming out.

Macmillan Audio has unabridged readings of Mistborn 1, 2, 3 and The Alloy of Law; The Way of Kings; The Rithmatist; and The Gathering Storm, Towers of Midnight, and A Memory of Light. They will also put out Words of Radiance, the sequel to The Way of Kings, with Michael Kramer and Kate Reading narrating, the same time the hardcover and ebook are released. But of course I have to finish writing the book first. (The first draft is nearing completion; I’m writing the epilogue now. Then it will go into revisions for a few months.)

Amazon has most of the above for sale. Audible has everything except for the GraphicAudio editions, and they are also the publisher of the audiobook for Legion. iTunes also has many of the books.

Tor.com has a free unabridged reading of the novelette “Firstborn” (see the “Listen” link in the left column).