Lots of news for you today! First off, I’ll be doing two Magic: The Gathering drafts this month that you can sign up for if you’re local to Utah. I’ll be at Epic Puzzles & Games in West Valley this Thursday, and I’ll be at Dragon’s Keep’s Orem store on the 21st. See the links for details.

I’m happy to say that I have two books up for votes in the first round of this year’s Goodreads Choice Awards. Steelheart is nominated in the category of YA Fantasy & Science Fiction, and you can vote here. And the final volume of Robert Jordan’s The Wheel of Time, A Memory of Light, is nominated in the Best Fantasy category. You can vote for that here. Additionally, Steelheart and The Rithmatist were both nominated for YALSA’s Best Fiction for YA.

Amazon has launched their Kindle MatchBook program in the US, which allows you to get ebooks for a reduced rate if you’ve bought the print version of a book from Amazon. You can read more about it and see your own list of eligible titles here. Now, I’ve long been in favor of offering a good way to get an ebook along with the print version of a book, and Amazon’s program is a good first step. Tor has decided to do a pilot program with MatchBook that includes three of my books: Mistborn: The Final Empire, Warbreaker, and The Way of Kings. All three Kindle versions are available for $2.99 if you buy or bought the print version from Amazon.

I’ve also included the ebook of my Hugo Award-winning novella The Emperor’s Soul in the MatchBook program for free. Legion is eligible too, but the MatchBook option will only show up if you previously bought the hardcover from Amazon, since it sold out and they don’t have any more copies. And as always, if you bought the print book of either novella elsewhere, I’ll give you the ebook for free if you email. Details on that are at the bottom of the page here.

Writing Excuses has posted two episodes that I haven’t mentioned on the blog. First is an episode with Wesley Chu about realistic melee fighting. And next is one of the biggest luminaries we’ve ever had as a guest: Tom Doherty, publisher of Tor, talked with us about publishing.

My assistant Peter has uploaded another of my Twitter posts archives. This one is for October and includes that massive fantasy chat I did with Christopher Paolini.

Way back in March I announced a convention exclusive hardcover of my novelettes Firstborn and Defending Elysium. 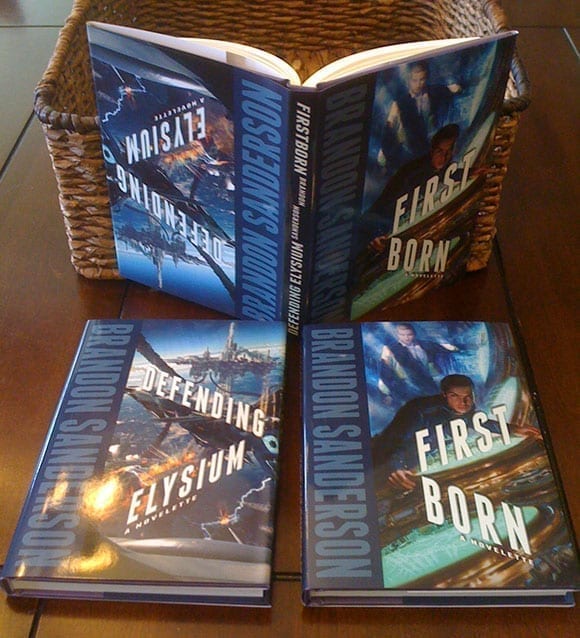 Well, since convention season is over, you can now order a signed & personalized copy of the hardcover in my store. And did you know you can buy signed hardcovers of all of my books that have been out for at least a year, plus signed bookplates to put in your own books? I also have jewelry, T-shirts, prints, and decals.

My store manager Kara has also given me this year’s deadlines for ordering from the store if you want your items to arrive by December 24th. These are:

One last bit of news that should make fans of Farscape and Stargate: SG-1 happy: I recently found out that Claudia Black will be the audiobook narrator for my novella “Shadows for Silence in the Forests of Hell” that is appearing in the upcoming Dangerous Women anthology edited by George R.R. Martin and Gardner Dozois. That book comes out in just one month, but I’m not sure if the audiobook comes out at the same time—it’s not up for preorder yet on Audible. You can read an excerpt of my story here.