I mentioned a while back that Steelheart has four exclusive editions in different stores. I’d like to take a few minutes to tell you about each one. 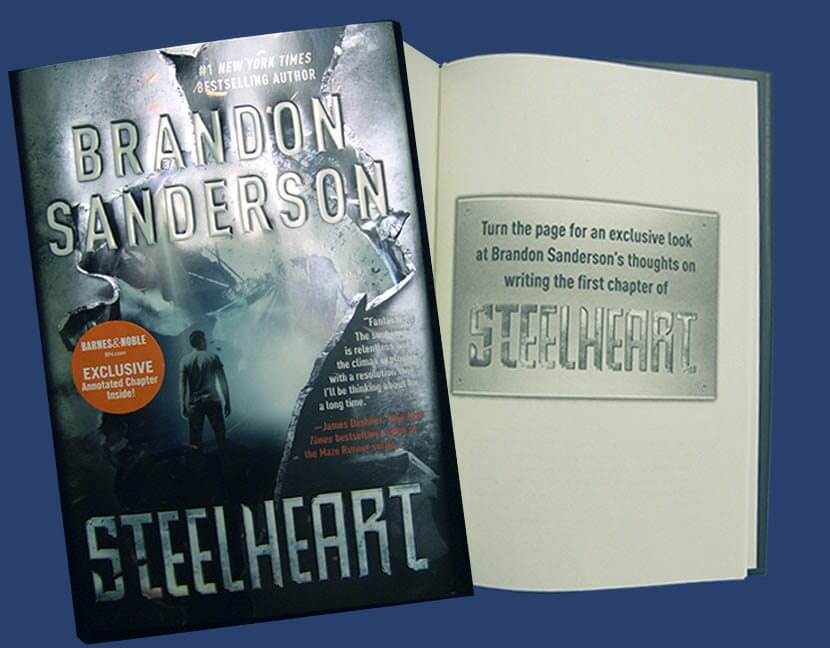 My website has chapter-by-chapter annotations that I wrote for many of my books, and people often tell me how much they love them and ask when I’m going to put up more. However, writing them is so time-consuming that it’s been hard for me to get annotations for my books done lately. Steelheart, however, has one annotation for you. The first chapter is repeated in the back of the Barnes & Noble exclusive edition, with one of my characterisitic annotations done in-line in a really cool way—as you read, you can get my commentary on the chapter, kind of like a director’s commentary on DVD. I think it’s super cool that they did this, and I hope that you’ll check it out.

We worked very hard to make the images in the exclusive editions all super cool. Regalia is the primary antagonist in Firefight, the sequel to Steelheart, so if you want a taste of what’s going on in the sequel, you should go check out the Books-A-Million exclusive and read up on Regalia.

Months back I tweeted that I’d decided to use a certain fantasy novelist I know as a model for one of the primary villains in the sequel to Steelheart. (I did this very lovingly, I assure you.) I love how the profile turned out. You should check out the Wal-Mart exclusive edition of the book and see if you can guess who I pictured as Obliteration, the person who’s been destroying cities all across the Fractured States.

In the Target exclusive edition you get to read about Newton, also one of the antagonists in Firefight. She has some of the coolest types of Epic powers in this world, and I’m really excited to write stories about her. I hope that you will enjoy getting a little glimpse into what will be going on and will be able to imagine some of the cool things she’ll do in the sequel.

Now, an update on the Steelhunt. If you haven’t heard about it before, this involves a secret area of my website that you need a code to enter, to unlock bonus content and previews (including of Words of Radiance and Shadows of Self). Five have been unlocked so far, and the Steelhunters are on the cusp of unlocking the sixth, with more to follow.

I left codes on lenticular postcards in books in many different bookstores. At the bottom of this post I’ll list a few more stores that have codes you can find, but I’ve also given some codes away on Twitter and Facebook. Here are the results of a contest I ran on Facebook (the contest is over now!) where you had to share the Steelheart trailer (YouTube link) and post a picture of yourself holding one of my books in front of a local landmark. Below are some of the winners:

The first entry was from Mark a.k.a. Harakeke. (He’s best known in the fan community as the person who first deciphered the Navani’s Notebook pages in The Way of Kings.) Here he is standing by “Modern Art” by Betty Sabo at the University of New Mexico, Albuquerque holding that (and Modern Art is holding Steelheart).

And here’s the most spectacular entry, from Stephen Megison. I can verify that that is indeed the Earth that he is flying by, while holding The Way of Kings. (The really funny thing is that he took the photo without knowing about the contest. Stephen is just the kind of guy who goes skydiving with his favorite books. I wholeheartedly approve of this awesomeness.)

Here’s the first winner from South America. Maricruz is standing in Plaza Murillo in La Paz, Bolivia with Aleación de Ley (you may know it as The Alloy of Law). Great, Maricruz!

Here’s the first winner from Australia. Mione is standing by the Playhouse Theater in Bundaberg, Queensland, Australia with The Way of Kings.

Dorien is the first winner from Europe. Here she is standing by Kasteel van Velm in Velm, Belgium with The Way of Kings.

In Donnguan, China at the Pullman Dongguan Forum, Christian has the ebook of The Way of Kings on his laptop. That works!

We never did receive an entry from Antarctica. If you have one of my books in Antarctica and want to send me a picture, I’ll still send you a code!

These photos were so great to see, I decided that everyone who entered is a winner. If that means you, look for my assistant to private message a code to you on Facebook later today (check your “other” messages folder if you have one). Here are a few more great entries.

Evan with Steelheart at the statue of Vulcan in Birmingham, Alabama—the largest iron statue in the world!

Wheel of Time beta reader Linda holding A Memory of Light by the Sydney Opera House.

Nicole at the Johnson Space Center.

Jason dressed as Tellingdwar the Littlest Terrisman, at the Purdue Engineering Fountain.

Becca in my hometown of Lincoln, apparently at the Water Tower of Nebrask.

And even more photos! Check out each of these: Noor, Rachael, Francesco, Necrosage, Tammy, and Daniel.

Congrats to all the winners, and enjoy the previews! There will be more Steelhunt opportunities in the future. For now, check out these bookstores that hid some codes in their books! I can’t guarantee that the codes are still there, since some of them were placed a while ago. And if you are a bookseller who placed codes in your store and I haven’t mentioned it yet in the blog, let me know. Also let me know if you’re a bookseller who wants to place codes!