Today I’ll be doing a Google+ video chat hangout with fellow fantasy author Brian McClellan. The event description says: Join these two writers as they talk about their newest books, the epic fantasy genre, and writing as a career in a live, online event on May 1st! We’ll be taking audience questions via Google Hangout and Twitter.

The hangout starts today at 1:00 p.m. Mountain time (19:00 GMT). We’ll send a link out on the social media networks right before it starts, so you can watch it live. There will also be a recorded version later.

Audible has started a “What We’re Listening To” author campaign that I’m participating in. You can go here to see the list of all the participating authors and what audiobook each of us is currently listening to, and what we have to say about that book.

Paste Magazine did an article on me, and it ended up the cover story! Check out the 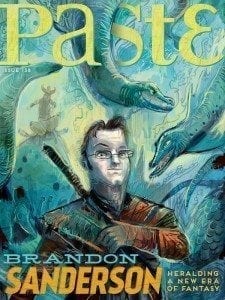 My assistant Peter has now uploaded all of my tweets for April.

I appeared on the Authors Think Tank Podcast talking about my laws of magic. Check it out!

Writing Excuses has two new episodes. Both of them are “microcasting” episodes where we briefly touch on several questions submitted by listeners.