Hey! Weekly Update time. It’s getting to be winter and it’s getting kind of cold, so I’ve broken out the authorial jacket with the nice patches on the elbows. I feel very professorly coming to you today. A few quick updates.

Skyward news. We have had an awesome reception to the first of the Skyward novellas. And we have a pretty aggressive schedule with these, which means that the second one is going to be out next week. That would be the last of the novellas until Cytonic is out in November, and then the final novella will come out after that. So if you aren’t up to date on your Skyward, you should go check out the first one, Sunreach, and be ready for ReDawn next week.

I am still working on some prewriting and clearing out some various things I need to do before I move on, doing some movie stuff and things like that that I can’t announce yet. I’m sorry about that. But there’s a few other things I wanted to mention.

My schedule for Mini-Con is out, this Dragonsteel Mini-Con that we are doing, putting on ourselves. And Adam will helpfully put that up on the screen right now. There’s going to be a spoiler Q&A. There’s going to be some other fun stuff with me. Dan and I will be doing a live podcast, stuff like that, that’s going to be interesting and fun for people who are coming to the con. If you can’t make it to the con, then we will be doing the stuff that is on Tuesday night, which is mainly my speech and Q&A and reading that will happen then. It’s a spoiler-free reading of something I’m working on. That will be available for everyone who wants to show up. Or those who pre-order the book anywhere in the country, you can get a code to watch that. 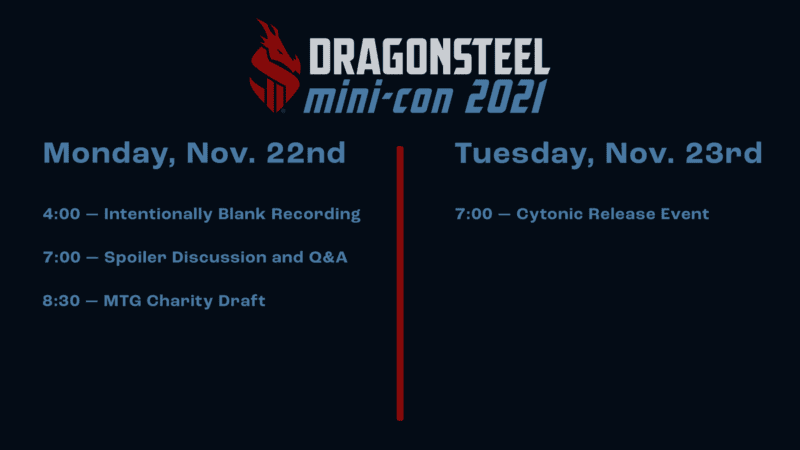 And speaking of the pre-order, last week I misspoke a little bit. The pin that you’re going to get is actually an M-Drone pin, rather than an M-Bot. That’ll make sense if you read at the end of Starsight, there is a drone involved, and it’s a new design for that. If you already have the M-Bot pin, this actually is something slightly different.

Other than that, only one other thing to announce to you, and that is for those who are wanting to take my class. Our submission window is going to be from 10:00 to 11:00 PM on October 23rd. So that is coming up. What does this mean? Well, during that hour we will take as many submissions as come in during that hour. Then my team, lead by Karen, is going to—she’s continuity editor Karen, and also a fantastic writer and editor. She is going to read through those and pick the 15 strongest submissions in order to be let into the small 15-person workshop that I do in conjunction with my class every year.

I often get questions of “Do I have to be local to take the class?” Yes, you do this year. You missed your chance last year when it was completely remote. I actually had one student from Belgium, and that was pretty fun. But this year you will have to be able to come once a week to Provo, Utah. So juggle that as you will. Do you have to be a BYU student? Not currently. You will have to sign up for BYU evening classes, pay a small fee. You sign up at—it’s easier to do than getting into the college or the university normally, because it is an evening class. But you will have to do that if you get in. You don’t have to get in, or submit to BYU first. If you get into the class, then you can go pay your fee at evening classes and take the class. At least, that’s how it’s happened with everyone in the past who has taken the class that was not currently a BYU student. So you can do that.

Tips for your submissions. A little extra weight is given to those who have taken the lecture series already. So if you are at BYU and want to take the lecture portion, that’s the version that I sometimes record for my channel here, you can just sign up for that. That’s open enrollment. It’s, like, 1 credit hour, and it’s just a lecture every week. It’s after that that I meet in a small group with 15 people and kind of try to mentor them on their writing a little bit. So if you’ve taken the lecture series already, you get a little bit more weight. The more books you’ve finished, the better. You get a little more weight if you can say, “Hey, I’ve written eight novels.” Right? So if you want to get in the class in a future year, that’s something to do.

Otherwise, it’s really based on the strength of your writing submission. How good is that writing? So maybe watch the lecture series. Do your best. Submit, and it’ll really come down to what Karen thinks makes the balance and mix for the class. Good luck to you. That is, again, October 23rd from 10:00 to 11:00 PM, our time, Mountain whatever time it is right now. I don’t know if it’s Mountain Standard or Mountain Daylight. I always get confused on that.

Either way, be watching the website. We’ll do more announcements on that. But there we are. And I will be back next week with another Weekly Update.