Adam here. I saw a ton of questions about Subterranean Press doing a limited edition hardcover printing of the final Stephen Leeds book, Legion: Lies of the Beholder, that would match the first two Legion books. In case you missed the announcement that went out earlier this week, Subterranean Press has started taking pre-orders on the 2,500 signed and numbered hardcover copies. This edition of Legion: Lies of the Beholder will feature a full-color dust jacket, and two full-page, full-color interior illustrations by Jon Foster–who also did the illustrations on the first two Subterranean Press Legion books.

In this week’s new Writing Excuses episode, Character Voice, Brandon, Mary, Dan, and Howard discuss how the flow, order, and feel of words that are unique to a particular character. This “character voice” is extremely useful in defining characters for the reader. In this episode they discuss their tools for shaping character voices, and the ways in which they make sure each one is unique.

Last week, we again join Kaladin on his search for Voidbringers, while Sylphrena makes awkward suggestions for his happiness, and Adolin visits his father’s Ryshadium. This week, in chapter eleven, we jump back in time again, thirty-three years, as Dalinar shows what a warrior armed with Shardplate can do to… well, pretty much anyone without Shardplate. It does have a few disadvantages, though.

The Twitter Archive for March is up to date.

This week’s featured cosplay is of Syl and Kaladin from Emerald City Comic Con. 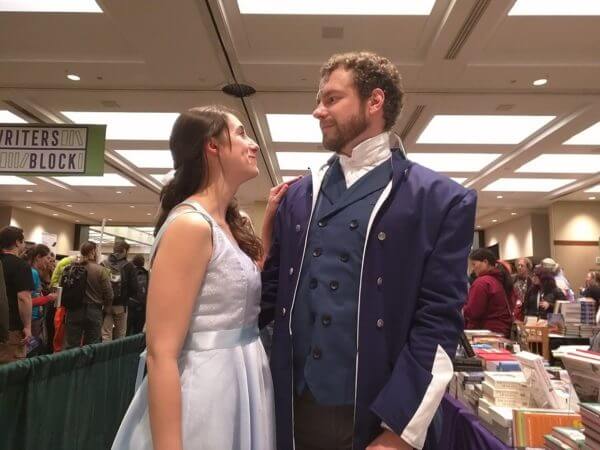