THIS IS HOW YOU DIE, Stories of the Inscrutable, Infallible, Inescapable Machine of Death | Brandon Sanderson
Skip to content

THIS IS HOW YOU DIE, Stories of the Inscrutable, Infallible, Inescapable Machine of Death

The anthology THIS IS HOW YOU DIE, sequel to THE MACHINE OF DEATH, was released today. I don’t have a story in it (I was considering submitting something, but I’m way too busy), but my friend and alpha reader Karen Stay Ahlstrom (who happens to be married to my assistant Peter Ahlstrom) does have a story in the volume. I was surprised when she submitted her story to our writing group, since she usually participates as a reader rather than a writer, but it was a great story and I think the anthology’s editors (Ryan North, David Malki!, and Matthew Bennardo) made a good choice when they plucked it from the field of over 2000 submissions for the volume.

What is THIS IS HOW YOU DIE, and what is the Machine of Death phenomenon? Longtime readers of my blog know I follow a lot of different webcomics. This particular phenomenon started with the following strip from DINOSAUR COMICS: 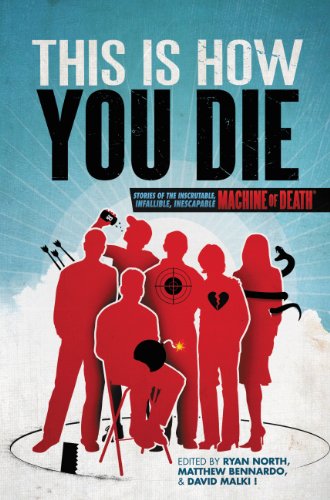 As I understand it, discussion got underway in the webcomics community about how cool the idea was: a machine that predicted your manner of death, but didn’t give you enough details for that knowledge to be very useful to you. DINOSAUR COMICS’ creator Ryan North and WONDERMARK creator David Malki! then got together with writer Matthew Bennardo and they edited the anthology THE MACHINE OF DEATH to explore the concept further. That book was indie-published and hit #1 on Amazon. THIS IS HOW YOU DIE is the sequel, and it was picked up by mainstream publisher Grand Central, an imprint of Hachette.

I think the concept is a great one, and the first book is quite entertaining. If you’ve read the first volume and are wondering if you should read the second, you may have noticed that one issue with the first is that a number of the stories tread the same ground, making a few of them a bit repetitive. The second book breaks that mold—the editors specifically put out a call for stories that took the concept in new and interesting directions.

I’ve read the second volume, and it certainly does that! A few of the stories do start out seeming like they’re going to be retreads and then you realize that something is wildly different. That’s the case with Karen’s story, titled “Machine of Death.” Each story in both anthologies has a title that is the cause of death read from the card the machine produces, such as “Natural Causes” and “Execution by Beheading,” but as in the comic above, these are often misleading. And that’s also the case with Karen’s story.

There’s also this trailer for the book (or basically just the concept). It’s a bit gory, if you want to avoid that kind of thing.

This is How You Die: Stories of the Machine of Death – watch more funny videos

THIS IS HOW YOU DIE – 90 page preview by David Malki